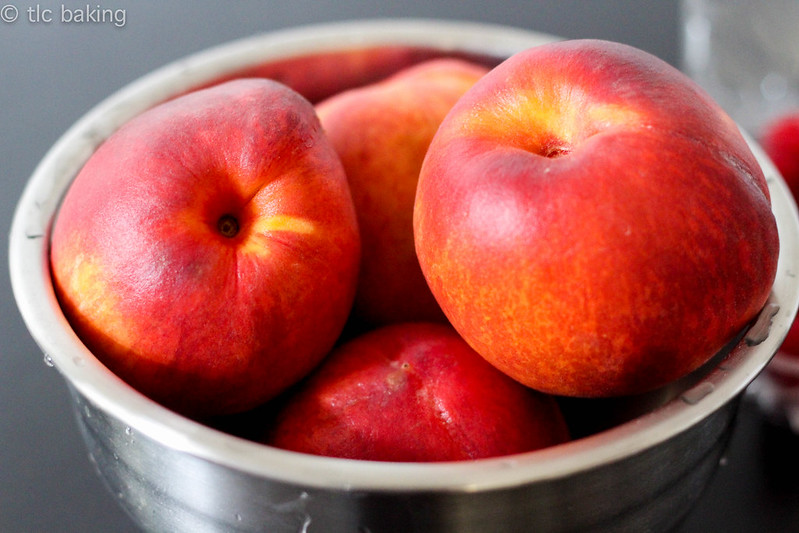 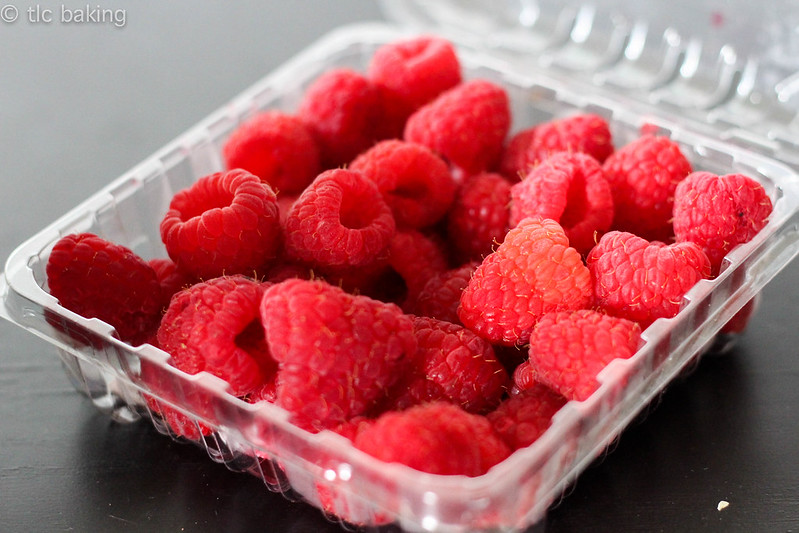 In-season and vibrant enough that I wish I could bottle the colors, these perfect summer fruits were absolutely irresistible. I bought more than I knew I could reasonably eat before they went bad, but I’ll be damned if I didn’t try my hardest anyway. 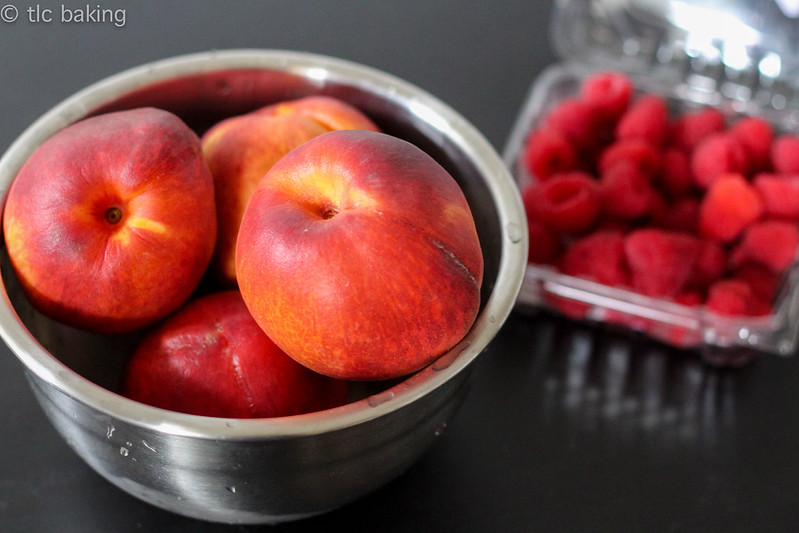 Seriously, does anybody else pop raspberries like candy? They’re so sugar-sweet, yet tart, and melt-in-your-mouth delicate. I’ve been known to polish off whole boxes while still standing at the kitchen counter.

(Can you tell I’m a little obsessed? I’ll stop.)

In any case, fruits like this just beg to be baked, and that’s exactly what I did. I was staying at Sheena‘s house for the long weekend, and I knew I couldn’t show up empty-handed, so I made this quintessentially summer cake from Smitten Kitchen.

Raspberries that burst in your mouth, peaches that gush juices down your chin with every bite, and a fluffy cake with a perfect crumb combine in this ideal summer evening treat. 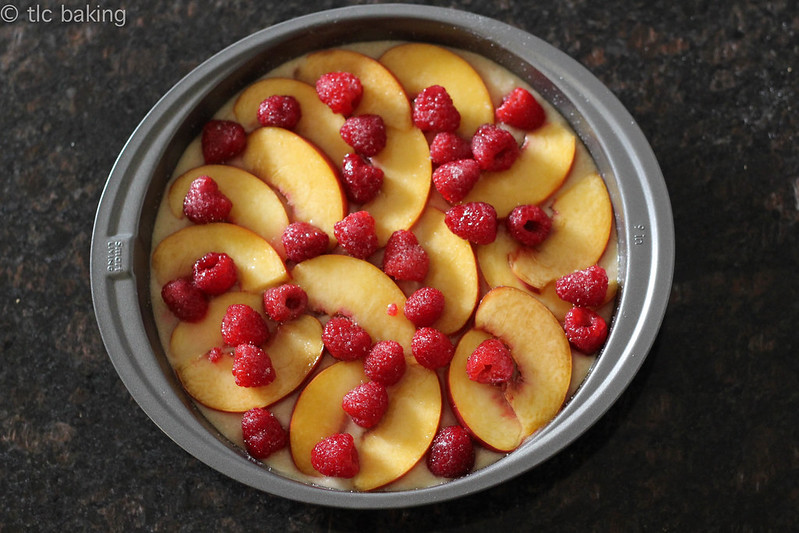 I want to eat the colors.

Can we figure out a way to make that possible? 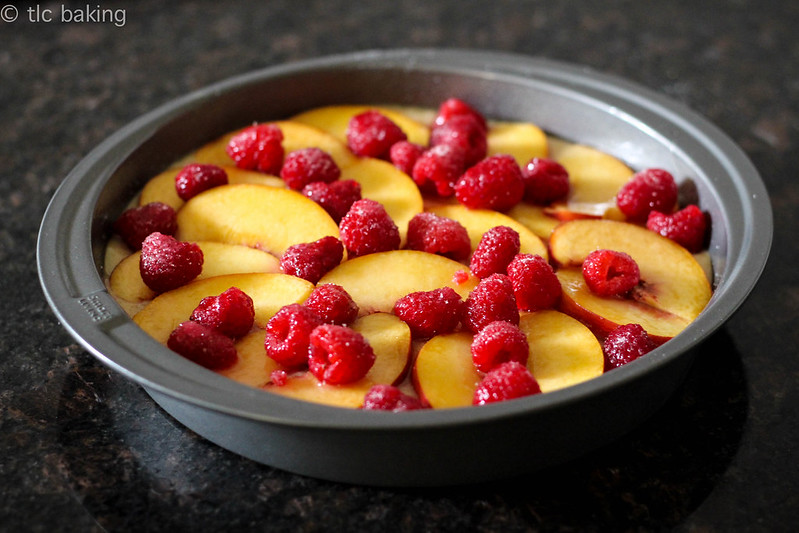 I followed Smitten Kitchen’s recipe with barley, but, inspired by The Baker Upstairs, I swapped the 1/2 cup milk with buttermilk, and topped the whole thing with 1/2 a cup of raspberries and one large peach, thinly sliced.

(Don’t worry; the rest of fruit–whatever didn’t end up in my stomach–found a home in the freezer, for when cooler days beg for a taste of summer sunshine.) 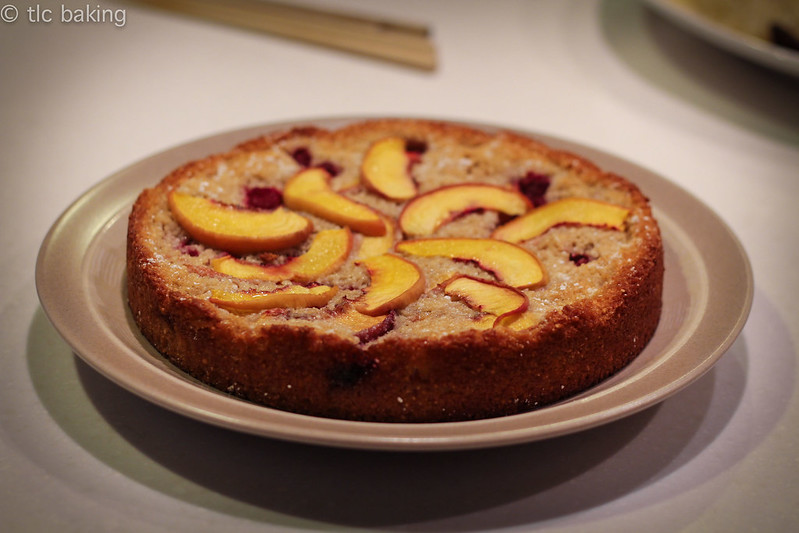 As you can see, the cake that went into the oven didn’t look quite like the one that came out. That’s because about 30 minutes in, I realized that the batter had swallowed up the majority of the fruit I had so carefully laid on top of the cake. So I pulled the cake out, added another layer of thinly sliced peaches and another sprinkling of sugar, and then popped it back in for the remaining 20 or so minutes.

Also, out of a lack of desire to buy an entire bag of barley flour, I had borrowed some of Sheena’s barley and ground it up in the blender. The result was a mostly powdery flour, with a handful of larger bits that the blades couldn’t quite break down. Those bits sank in the oven, giving the cake a crunchier crust-like layer along the bottom of the pan. I liked the texture, but next time, I’ll definitely opt for a finer flour to have a more even distribution of barley. 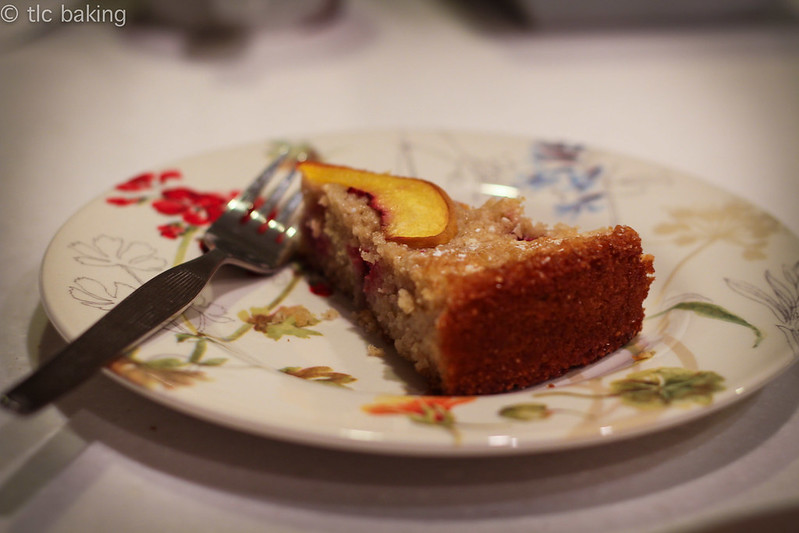 The verdict? 10/10, would bake again in a heartbeat. It’s light and moist, but with an amazingly complex flavor from the barley. With seven of us in Sheena’s house for the weekend, the cake vanished almost instantly after the first slice was cut.

But next time, I’ll be experimenting with different fruits and flour combinations. The Baker Upstairs’ cake is absolutely gorgeous with those peach slices sinking only slightly into the pale, fluffy cake–somehow reminiscent of butterfly wings–and I definitely want to try to recreate that.

Let me know if you try the cake–especially now as the weather is hinting at turning, and the farmer’s market trades its berries and peaches in for crisp apples and pears.