At some point, I think I’m going to have to rename this blog Attempts to Recreate Every Smittenkitchen Recipe Ever, because Deb is just 100% my go-to for desserts–especially fruit-based ones. I made her strawberry graham ice box cake for a Memorial Day cookout (post coming at some point), and when I found myself with 4+ pounds of freshly-picked tart cherries on my hands a few weeks ago, I knew I had to jump on this sour cherry pie with almond crumble.

Seriously, Deb, have you ever made a fruit dessert that isn’t incredible? 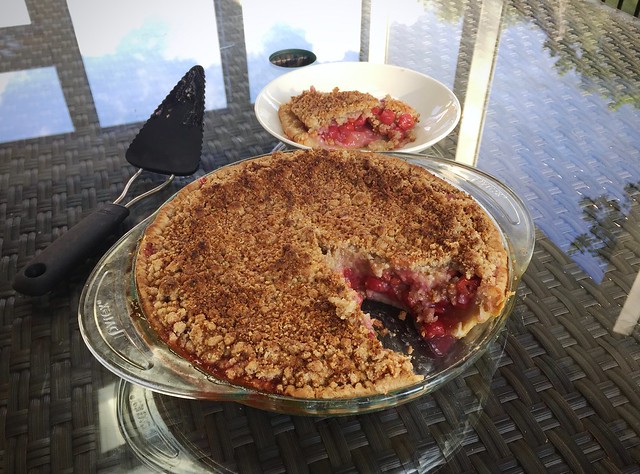 This is everything a cherry pie is supposed to be. Ever-reliable, ever-flaky, buttery pie crust holds up more than 2 full pounds of tart, juicy, bright red cherries, each one a bursting nugget of sour-sweet joy. Top it all off with a nutty, warm crumble, and you have an absolutely irresistible slice of pure summer. Pair it with a scoop of vanilla ice cream while it’s piping hot, or eat it the next morning right out of the fridge with a cup of coffee. This pie does not disappoint at any temperature. 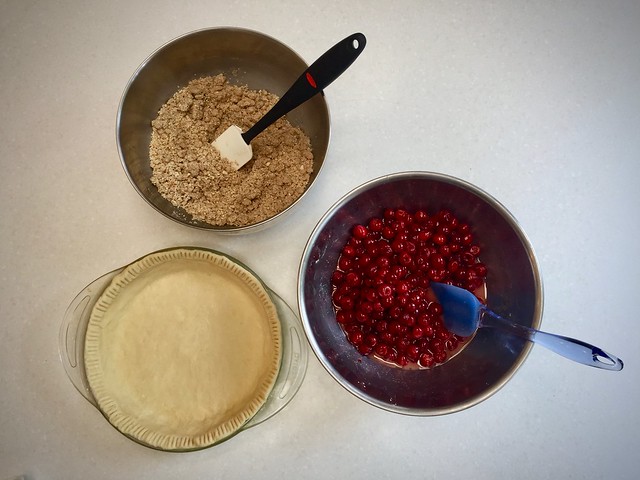 Pro tip: if you’re pitting fresh cherries, do yourself a favor and grab a straw to help the process. If you’re like me, you’ll stab your fingers at least a few times, but the speedup will absolutely be worth it. (Special shoutout to the boyfriend for not only taking me to the farm to pick these cherries and helping me make the crumble, but also for destroying his fingertips with me to pit over 2 lbs of these beauties.) 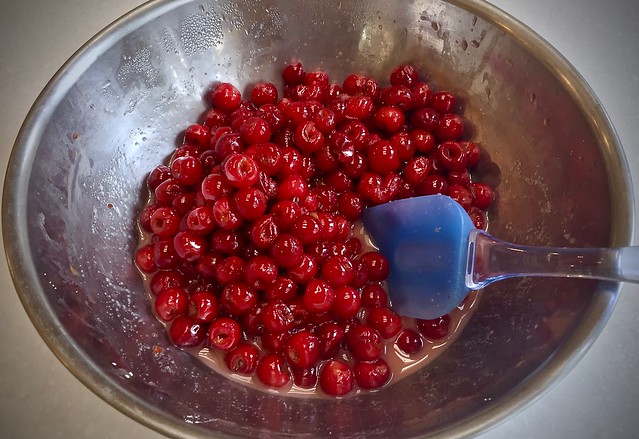 And really, the cherries are the star of this show. While I’m pretty sure I could eat that crumble by the spoonful, the almond-oat crunch and melt-in-your-mouth dough are just the supporting actors in a tart cherry extravaganza. 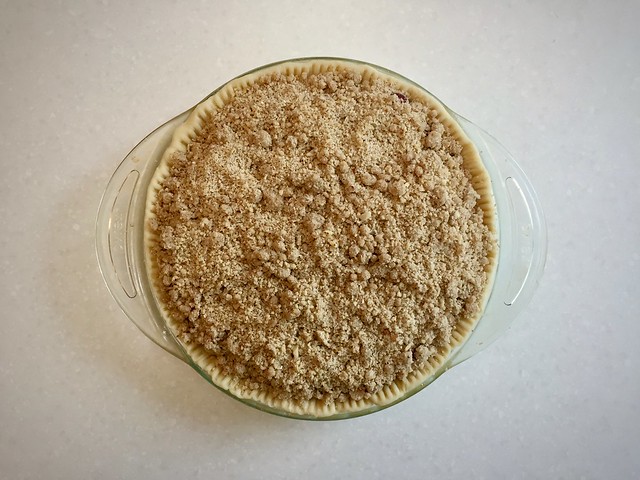 And when I say “supporting”, I really should clarify: buttery and nutty goodness aside, there are not many doughs in the world that could physically support this weight of pure summer fruit. This crust, alas, is not among that short list, and it is quite difficult to plate a clean slice. But hey, who’s mad about a few spilled cherries? 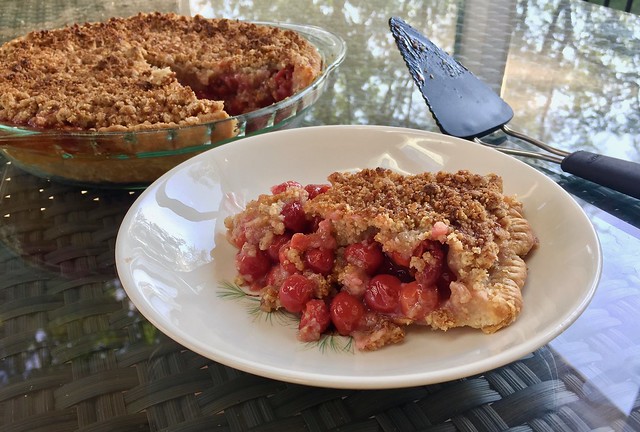 Tart cherry season is still going strong in most parts, so get yourself a pint or three while the getting’s good and heed the calls of this plate of summer’s joy.

Oh, and if you’re wondering why my photos look a little funny, it’s because these were all taken on my phone. Simple side effects of baking while traveling light; I didn’t have my camera on me. Lucky for us, photo quality has no effects on the taste of pie. 😉

To anyone else currently listening to the last bits of a nearby fireworks display, or wishing that your neighbors’ kids would stop popping firecrackers in the parking lot after 10 pm, or perhaps even (carefully) lighting a few of your own: Happy Fourth of July! I hope you all celebrated with the appropriate company of good food, good friends, and ample pie. Here’s to another year of doing our parts to make our country the best it can be. 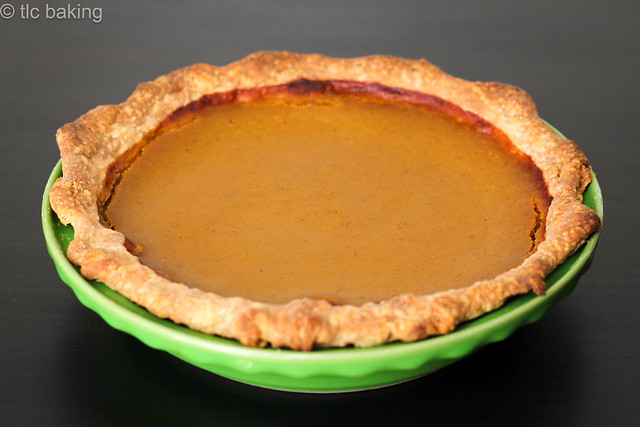 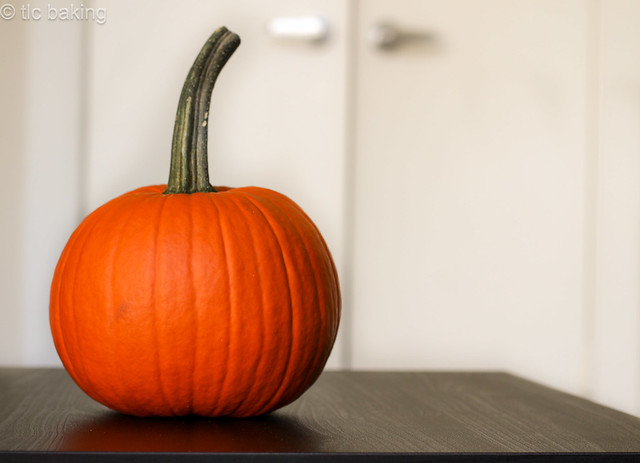 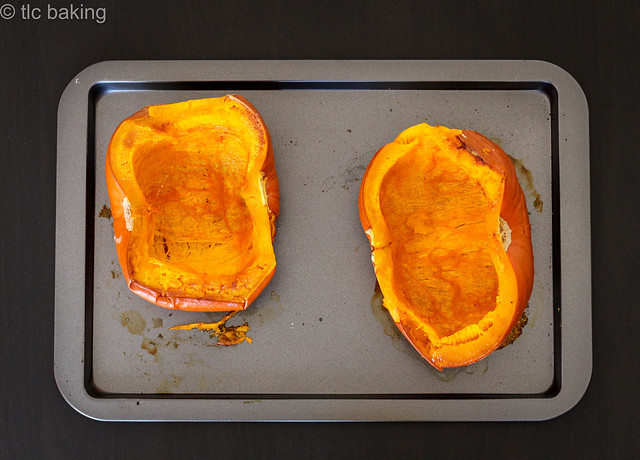 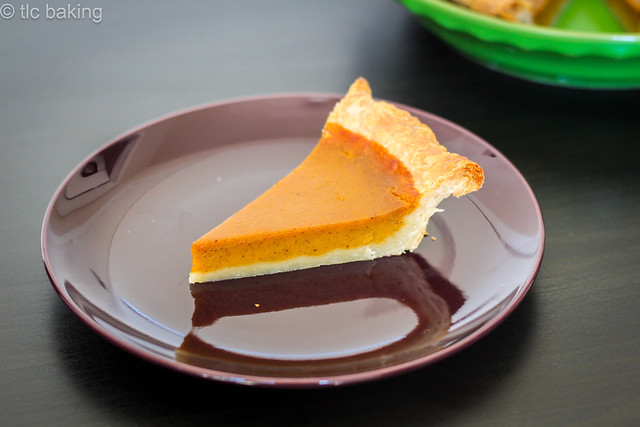 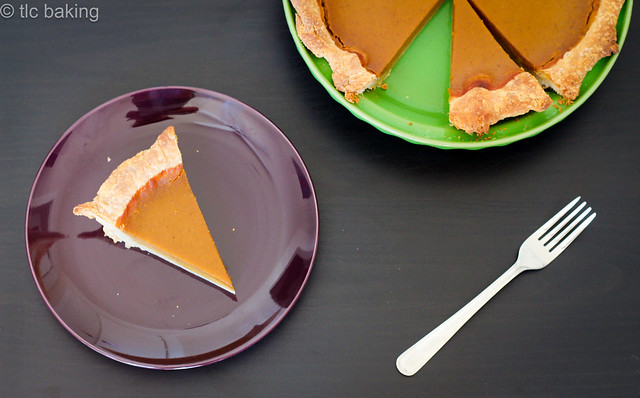 December, yes, with its holiday cookies and cookie swaps and neat little DIY boxes tied with ribbon and full of festivity–but winter, as a whole, is a season for warm cookies fresh out of the oven, paired with a piping hot cup of black tea with milk. Even though Chicago can’t decide whether or not winter is actually happening this year, I dream of gooey, melting chocolate chunks and sugar-dusted buttery crumble.

Then again, maybe this is just me developing a shortbread obsession this season.

Over winter break, I made a grand total of seven different kinds of cookies, five of which were variations of shortbread. I have zero regrets about this, for the record, and I doubt any of my friends and family do, either.

One was a repeat recipe: chewy coconut lime sugar cookies, enhanced this time by rubbing lime zest into the sugar I used for rolling. The remaining six, however, were all new ventures. I didn’t properly photograph all of them, but I’ll be unrolling the ones I did, hopefully in time for you all to try them out before spring starts appearing.

We start the lineup with easily my favorite of them all: chocolate-dunked pistachio shortbread, recipe courtesy of Food52. 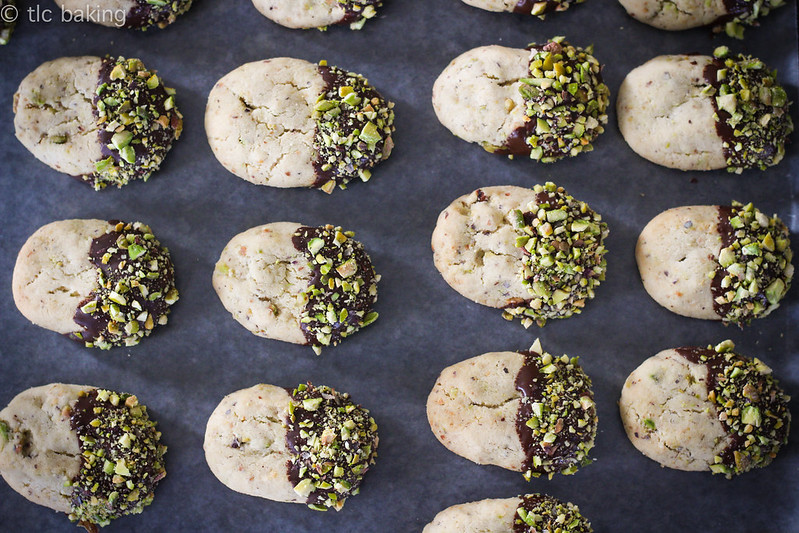 These rich cookies are shockingly easy to make, yet bursting with flavor. Melt-in-your-mouth, crumbs-on-your shirt shortbread is made even better with the bright green, buttery crunch of fresh chopped pistachios and a smooth and generous coating of semisweet chocolate. 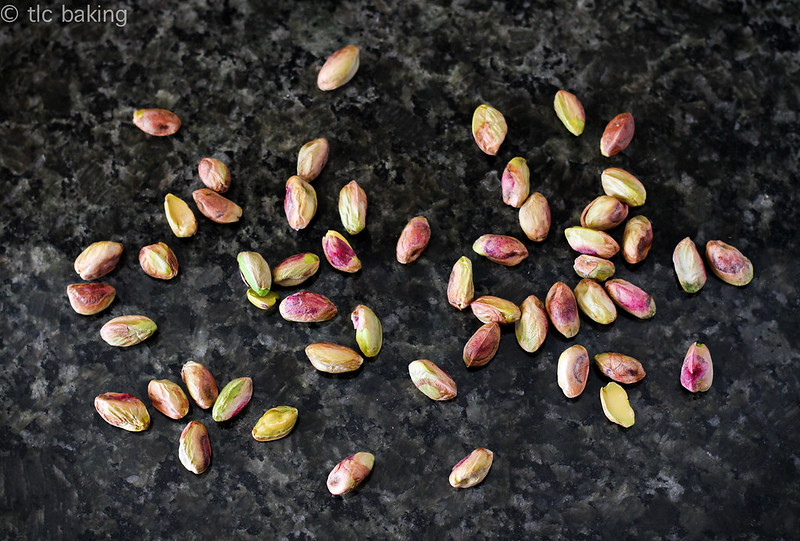 Ever since my stay in Turkey, I’ve been craving a good pistachio dessert. Pistachio ice cream, pistachio-and-cream-filled pastry, and even pure pistachio paste–Turkey just knows how to turn these little nuts into an intense and luxurious experience. 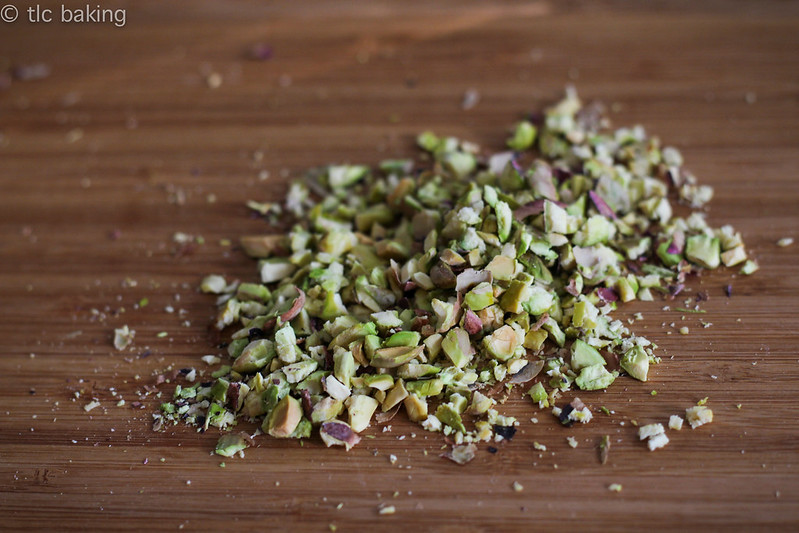 And let me tell you: with nearly a full cup of chopped nuts, these cookies do not skimp on the pistachio experience.

If you buy your nuts in small packages at a standard grocery store, this recipe could get expensive. I highly recommend trying something like Costco or a South Asian/Middle Eastern grocery store to buy nuts in bulk. Much more affordable, and who doesn’t want a bag of leftover pistachios to munch on? 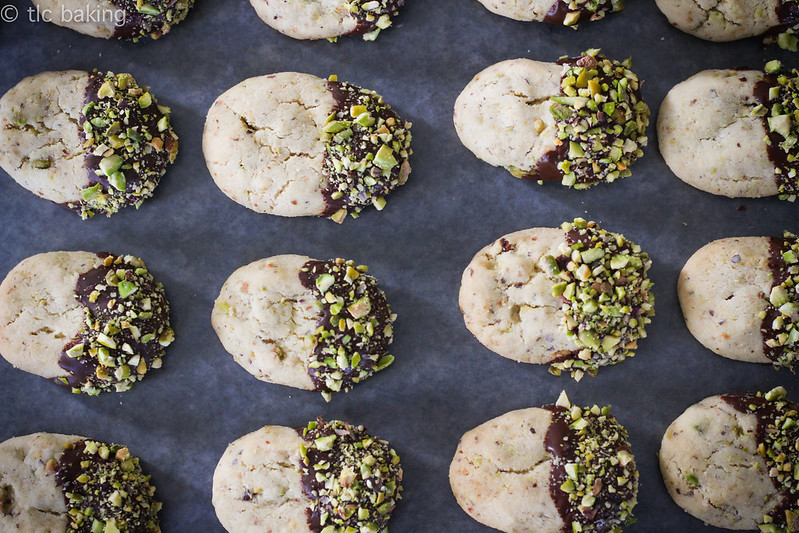 As for the chocolate-dipped part: you don’t need a double boiler, and you don’t need super high-quality chocolate for these to be absolutely delicious. I melted dark chocolate chunks (not chips!) in the microwave in 15-second bursts, and that was perfect for coating half of each cookie in a thick, smooth layer of chocolate that hardened nicely after a few hours. 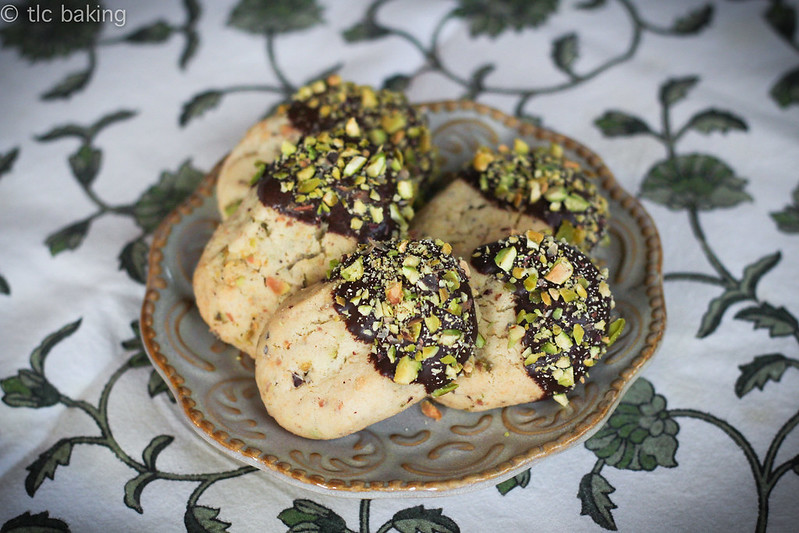 I sent some of these home with the boyfriend after he visited, but to be honest, I mostly ate them myself. Like I said: zero regrets.

To my UChicago friends, happy 8th week! And to everyone else, happy last week of February! May the remainder of your winter be crisp and cookie-worthy.